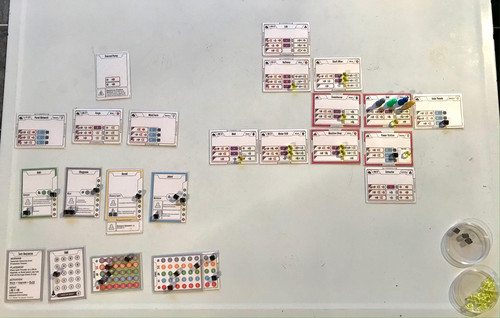 ExoBase 0.6 is finally here, and this is the largest update it has received. This is a major overhaul of the game; every card has changed, and a few new ones have been added.

The goals for this update were to simplify the rules, reduce component count, improve the flow of each turn, and reduce the play length. This definitely feels like it's moving in the right direction, and I'm excited for you to try it.

Here are the highlights:

Removed rover, vac suits, and detached locations
- This added quite a few components to the game, and there was a lot of confusion about how this all worked.
- It added locations that weren't attached to the base; the point of the game is to build a cool base with locations that are connected and working together.

Removed setbacks
- Intended to be the "hostile environment" that you are battling against, to provide some drama and a sense of struggle to the game. It only mostly just served to slow the game down, and threw off the rhythm of the turn sequence.
- Setbacks actually discouraged adding locations to your base, which is the "the thing of the game".
- Removed the -1 tokens
- Removed "damaged" and "destroyed" locations. This cut the entire section of rules on "cut off locations," which was finicky and confusing.

Changed the adjacent bonus rule to only apply the bonus to itself, rather than to adjacent cards.
- Removed the +1 tokens; this should be easy enough to track without tokens.
- It was too overpowered, when it was able to be applied to multiple other locations, and locations could have multiple +1's on them.

Added a time tracker card, which counts down from 20 turns, at which point the rest of the colonists land and the game ends.

Removed VP from the game.
- A minimum amount of resource production is required to win, instead of VP.
- The goal of the game is to build a self-sustaining base before the rest of the colonists arrive; basing victory on production is more thematic and less arbitrary/abstract.
- Increased the number of cards that add to your production.
- The triangle icons on each row now all read 1-3, and simply indicate the upgrade level for the location.

Removed "pay x HP when working" cost and replaced it with a Damage Check: "roll xD6; for each die showing 1-3, take 1 damage."

- New icon for damage checks that's larger and easier to read.
- Removed the "pay 1 food for each founder every turn" rule